Paul Shawyer is studying Geology at the University of Southampton

Over the past few days the weather has been changeable in the Whittard Canyon resulting in fewer ROV dives as it has been too rough to launch. We have however been able to get sediment samples with a piston corer. My masters project is based on down-canyon changes in the character and timing of submarine flow events in Whittard Canyon. We are aiming to collect a series of piston cores which represent a transect across the lowest part of the canyon, the thalweg, where the main canyon arms converge in the deeper depths of the canyon, at around 4000 meters. Using new cores collected on this cruise along with cores collected on a past cruise to the Whittard canyon, JC36, we will be able to see the nature of sediment flows across the canyon.

The piston coring rig itself is a long steel barrel which can be 6/12/18 meters long with a plastic pipe of the same length inside, which is lowered down to the seafloor by a winch and then allowed to free-fall the last part and penetrate the sediment with the help of the heavy head weigh attached to the barrel. The piston part is attached to the barrel head and causes suction effect to the sediment upon pulling out of the seabed stopping the sediment core falling out of the tube. Once the rig is winched back to the ship and on deck the plastic pipe is removed from the barrel and cut into sections and split to allow us to see a record of the sedimentary history of the canyon inside. This is a very hands on and muddy task for the scientists on duty!

So far we have obtained 5 cores, two of which were very successful, with core lengths of 9 meters and 7 meters. These two cores came from terraces either side of the thalweg and show a decreasing trend from bottom to top of the size and frequency of sediment flow deposits suggesting the sediment input to the canyon decreased with sea level rise after the last glaciation event.

It has been a fantastic opportunity for me to be a part of this cruise and to experience the process of collecting the sediment cores. Being able to see the ROV dive footage and AUV data taken in the canyon has allowed me to understand the geomorphological processes active in the canyon at present and witness the rich biodiversity the Whittard Canyon is home too. 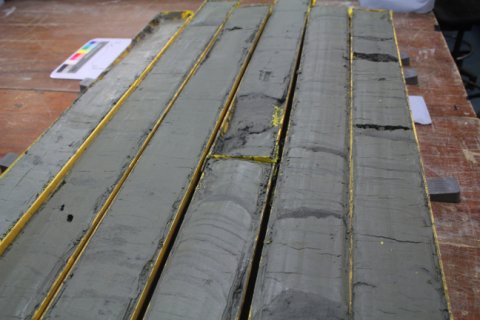 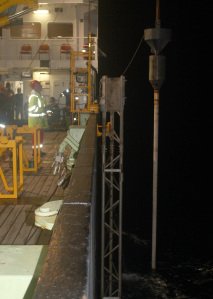