Third robot of the cruise! A seaglider is deployed within Whittard Canyon

Yesterday, the sea was much calmer after a few days of bad weather, and it was time to deploy our third robot of the cruise: a seaglider! Although I had been involved with previous deployments using a seaglider, it was the first time I was doing it by myself. Thankfully, the captain and crew above the James Cook are used to nervous scientists, so they went through the procedure with me and put my mind at (relative) ease. Deploying a seaglider isn’t without difficulties, for example, the seaglider can bounce on the surface and get caught up in the ropes and break all the important bits: the antenna, which is how it communicates, and the sensors, which measure various things in the ocean.

The benefits of a seaglider, however, are numerous. They are autonomous, meaning that once they are in the water, they require minimal effort from the ship. They use little power as they utilise buoyancy to dive; oil is pumped into an external bladder, which increases the volume of the seaglider and hence you can regulate the seagliders density, allowing it to dive and then resurface. This means that seagliders can be left out on long missions. On this cruise it will be collecting data for 21 days, but they can do so for months. Once it’s at the surface it sends its location via satellite and even uploads a bit of data, you can track our seaglider here. Back home, at UEA, we have a pool of seaglider pilots consisting of PhD students and staff, who take it in turn to make sure that once a seaglider is out in the ocean, that it knows what it’s doing, can check if something is going wrong and send it new commands and updates to the mission plan.

The starboard deck was busy with people wanting to see the deployment, and after much seaglider-dangling-over-the-side-of-a-ship, our seaglider was deployed and a short test dive carried out. It disappeared off beneath the water and then after 25 nail-biting minutes it surfaced and sent us a GPS location. A few of us went off to the bridge to do some seaglider-watching, a change from our usual activity of bird and whale watching, and spotted the seaglider about 500 metres away from us. Our seaglider seemed to have attracted the attention of a few birds as it surfaced though, and was surrounded! The completion of a successful dive meant that everything was OK and that we could leave it to continue on it’s mission. Using the seaglider, we hope to collect high resolution data on what the water column is like within the canyon and to also measure internal waves, which you can read more about in my last post. 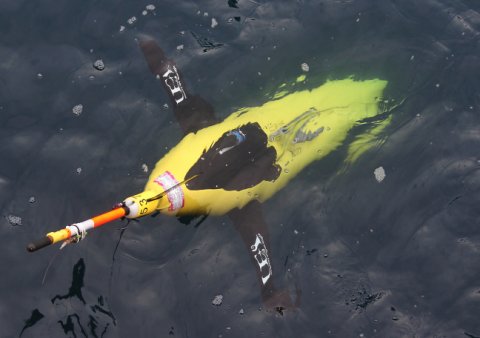 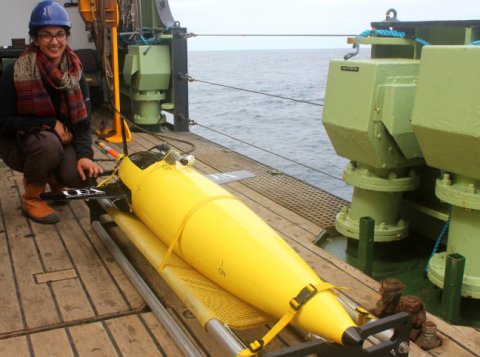