The seafloor at higher and higher resolution!

This blog post was written by Katleen Robert, a postdoctoral researcher at NOC

One of the main aims of the CODEMAP cruise is to use innovative methods to map the seabed.  For many of the deeper areas, we still only have coarse maps for which many of the finer details, such as vertical walls, small gullies or coral mounds, are absent. However, these are important features, that play a big role in the local biodiversity in the canyon. To do the mapping, multi beam echosounders are usually used.   These sonars create a swath of sound across the path of the ship and measure the time for the sound to leave the ship, bounce off the seabed and return.  This gives estimates of the depths below the ship.  But to get more details, we need to get closer to the seabed.  This is where autonomous underwater vehicles (AUVs) like Autosub6000 or remotely operated vehicles (ROVs) like ISIS are useful; they can fly much closer to the seafloor (less than 100m).  Of course there tends to be a trade-off, as we get more and more resolution, we tend to be unable to cover very large areas.  This is why we still very much rely on ship-board multibeam to find target areas to further investigate using the AUV, and then use the maps resulting from the AUV surveys to decide on ROV video transects.

For one location in the eastern branch of the canyon, where a vertical wall covered in cold-water corals had been discovered during a previous cruise in 2009, here is an example of the different levels of detail that can be achieved using all the vehicles.

The first layer is part of a larger ship-board survey of the entire canyon branch (resolution ~50m), the second layer is from a ~25km2 AUV survey (resolution ~5m) (upper panel), and the third layer shows the previously mapped vertical wall (middle panel), a survey carried out using a multibeam mounted on the front of the ROV (~0.5m resolution).  The white track shows an ROV dive carried out during the CODEMAP cruise imaging overhanging cliffs covered in both hard and soft corals, clams and anemones (lower panel).

But in the end, why do we do this?  The information we get from the bathymetry allows us to derive other environmental characteristics such as slope (steepness and direction) or rugosity of the terrain.  As animals tend to select habitats with specific characteristics we can try to link these to where specific species occur, based on the collected videos and pictures.  Since we still lack information about the distribution of many species in our oceans, these links between species and their physical habitat can provide us with some information for areas we have not yet explored. 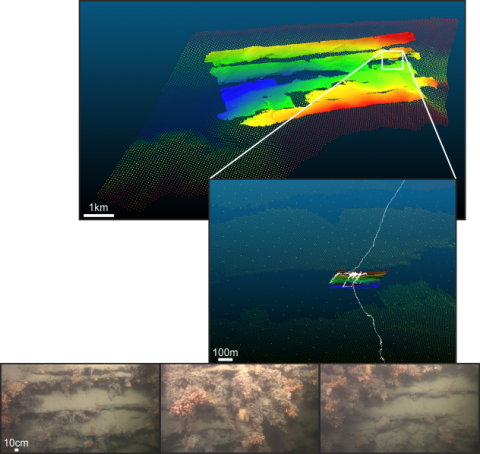