On sea pens that look like trees and black corals that are … orange!

This post was written by Raissa Hogan from the National University of Ireland, Galway

With the last ROV dive we closed the very successful biological sampling of JC125. These samples are invaluable for our better understanding of the biology and evolution of marine species, as well as their role in the largest habitat on the planet -the deep sea. These can also help us to understand better which kind of protection this ecosystem requires.

Overall, deep-sea research is known for being very difficult and expensive, mainly because of the extreme environmental conditions, such as darkness, high pressure and low temperatures, requiring advanced technologies as the ROVs and AUVs to be able to cope with such conditions and still bring us high quality data.

Despite my research on the deep-sea coral species Pennatulacea (sea pens) and Antipatharia (black corals) collected from the Whittard Canyon between 2010 to 2014, I haven’t actually been here before, making this a very special expedition. Also, it was the first time my project collected samples in depths deeper than 3000 m. These samples are an important component to assess the phylogeography ( the patterns of present-day geographic distributions of species as a result of genetic selection processes) and to understand how these species evolved in the oceans over different spatial scales and bathymetric ranges. Nevertheless, one of the challenges is that the taxonomy and identification of deep-sea species are still unclear, with new species frequently being described. Because of this, the first step of my project is to assess the diversity of species from the Whittard Canyon with a combination of molecular work (DNA analysis) and traditional morphological investigations, needing also to develop further markers to obtain a greater molecular signal.

In fact, when I was first organising my working plan for this cruise, I was really focused on which species I was going to find and would be able to collect, and how they would help me to assess the phylogeography of these groups. However, even though these were the main objectives, the interaction with the other researchers, engineers, ROV pilots, vessel crew and chefs opened a new and great perception of the cruise in the Whittard Canyon. Definitively, I will be taking with me a lot more than just the amazing coral specimens collected. Yeah! I need to admit that my “geologist” side has developed considerable. I will recognise a “turbidite” (basically, it is a bit of sand in the middle of mud ) :) in any core in the world… Thanks Russ!

But I also think my colleagues became quite good in identifying some of the species of sea pens and black corals. First they got a bit disappointed to know that the black corals actually have strong warm colours like orange and red, but when I showed them the samples with their black skeleton they became a bit more convinced. According to some of them, sea pens look like trees, which reminded me some of the first descriptions of these animals back in the 16th century: “They look like a small tree, but if we touch them they can bury themselves, and they also have light (bioluminescence), and then, when they die, they become a rock!!!” Indeed, sea pens are quite intriguing animals, being the most advanced of octocorals in terms of their colonial complexity and functional specialisation. They are adapted exclusively to soft sediments, having a part of their organism, the peduncle (that looks like a roots), that stays buried and keeps them anchored in the mud.

During this cruise, the sea pen that became the most popular was the genus Umbellula. They are the ultimate in adapting to the deep-sea conditions, with large polyps to enhance the food capture. In the ROV control van everybody, from the ROV pilots to the geologists, enjoyed to see the deep-sea “flower” Umbellula!!! In fact, the deepest sample collected (at 4173m), was an Umbellula! That was a good reason to celebrate! 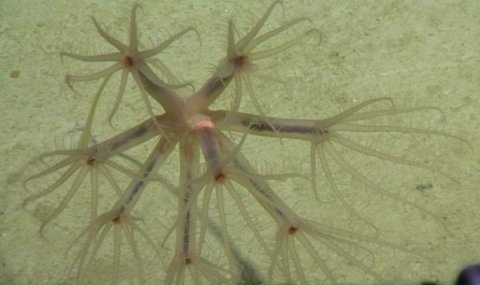 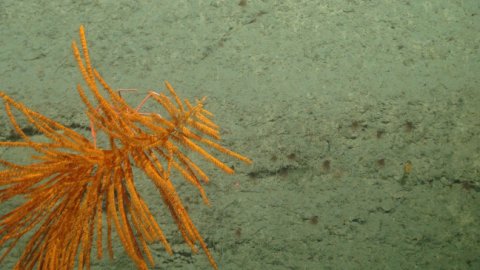