Our first science mission starts today, so everybody is very busy. We will deploy our Autonomous Underwater Vehicle (Autosub6000) to survey an area of seafloor called Haig Fras, which is located on the mid-shelf west of Cornwall. This work is funded by Defra (the UK Department for Environment, Fisheries and Rural Affairs), and involves a repeat survey of a section of Haig Fras that we first surveyed with Autosub6000 in summer 2012, i.e. three years ago. This original survey was itself a repeat of a ship-based survey of the site earlier that year.

The objective of these repeat surveys is to test the effectiveness of AUV technology for repeat mapping of Marine Protected Areas, and to ensure that the quality of data matches that of conventional ship-based tools. The 2012 AUV survey was very successful, and in 18 hours the vehicle produced a high-quality map of the seabed and collected over 15,000 photographs; these images have been used to link the different seabed habitats with different species of animals living on the seafloor. Our repeat survey this week will tell us if the seabed itself has changed in the last three years (unlikely!), and/or whether the animals living in different habitats across the site have also changed in distribution and/or abundance (more likely!).

Haig Fras was targeted for this work as it was designated as a Site of Community Interest (SCI) under the EC Habitats Directive; it represents Annex 1 Reef, and is also part of the Greater Haig Fras recommended Marine Conservation Zone (rMCZ). The reef is an isolated granite outcrop which rises from approximately 100 m depth to 40 m at the shallowest point. Haig Fras represents the only substantial area of bedrock reef in the Celtic Sea and the reef is up to 45 km long and 14 km wide, covering an area of 481 km2.

Various sessile fauna have colonised the reef, from Jewel Anemones (Corynactis viridis) and Boring Sponge (Cliona celata) [which bores into rock rather than being dull] near the peak, through Football Tunicates (Diazona violacea) and Ross Coral (Pentapora foliacea) [actually a bryozoan] to Devonshire Cup Corals (Caryophilla smithii) and Staghorn bryozoans (Porella compressa) near the base. More mobile fauna that inhabit the reef include various wrasse and gadoid fish species, Squat lobsters (Munida rugosa) and Spiny lobsters (Palinurus elephas).

Once the AUV is deployed and ‘on mission’, we may also be able to deploy our Remotely Operated Vehicle (Isis) nearby to collect physical specimens for identification; this will support ongoing assessment of this site by Defra, Cefas and JNCC. 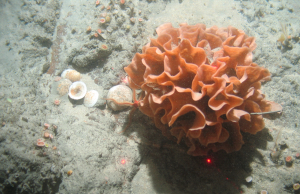 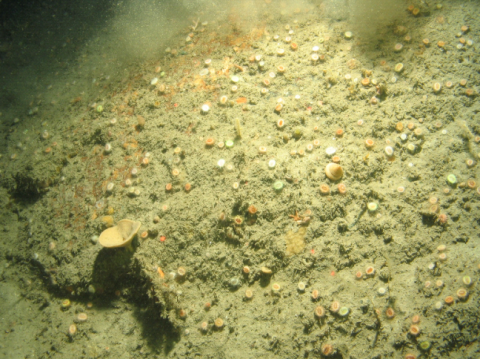