Making waves on the seafloor!

One of the most exciting aspects of going to sea is exploring and discovering, and these emotions never fade, even though some of us have long sea-going experiences. Yesterday, we explored a unique field of submarine sandwaves. Sandwaves are seafloor bedforms which form pretty similarly to the dunes seen in deserts. They are made of sandy sediments and are generated by submarine flows related to storm waves and tidal currents.

Our sandwaves, mapped with the multibeam echosounder, are found along the outer shelf at an average depth of 200 m, only 2 km from the head of the Whittard Canyon. There are up to 40 sandwaves in a 20 km2 area with their wavelengths ranging from 300 to 600 m and their heights from 3 m to up to 10 m. The shape and orientation of these bedforms can give us important insights into the flows that generated them. In this case, sandwaves are strongly asymmetric towards the coast, suggesting that strong flow upwelling from the Whittard Canyon may have generated them, something really uncommon to observe. This hypothesis may be confirmed by the oceanographic data that the glider, deployed and controlled by Tahmeena, from the University of East Anglia, will be acquiring during the next three weeks. We finally decided that it was really worth doing an AUV (Autonomous Underwater Vehicle) dive along these sandwaves. The AUV is similar to a small submarine and acquires precious information about the morphology and sediment texture of the seafloor, as well as information about just beneath the seafloor surface.

As geologists and geomorphologists, these impressive bedforms are definitely an exciting place for us to explore. The collected AUV data shows smaller bedforms on top of the largest sandwaves, suggesting a very complex sedimentary and oceanographic environment. Even the biologists onboard share our enthusiasm about these unique bedforms!!! 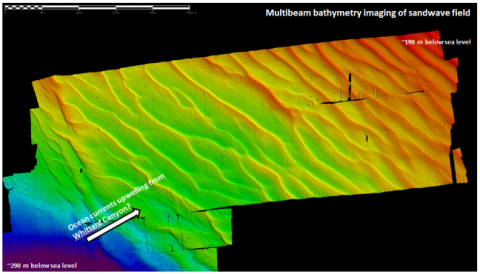 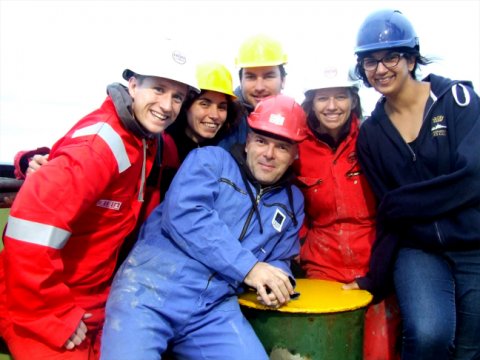