This blog post was written by Ella Richards, an AUV mechanical engineer at the MARS facility

One of the main tasks for Autosub6000 on the Codemap Cruise in 2015 is to collect high resolution echo sounder (multibeam) data depicting some of the vertical walls in the Whittard Canyon. In the AUV’s standard configuration, the multibeam sonar heads are pointing directly downwards and give very good topography of the horizontal parts of the seabed. Part of the Codemap science program is focussed on the geology and the animals that live on the steep, vertical or overhung canyon walls, which the multibeam system has trouble covering in detail. To gain the required detail the head that ‘hears’ the sonar pings from the transmitter, the RX head, has been tilted towards the canyon walls to be able to collect more detailed data from the canyon walls. Work on adapting the vehicle and the control software started over 13 months ago with concept and design meetings between members of the Autosub Engineering team and some of the Codemap Scientists. After the design specification was written, work was able to start on the mechanical changes needed to the vehicle and writing the code that would allow the vehicle to track the canyon at a constant distance from the wall.

Autosub6000 is capable of keeping a constant vertical distance from the seabed by using sonar pings from its ADCP (Acoustic Doppler Current Profiler). The pings tell it how far away it is from the seabed, and if it is too close the control centre of the AUV will tell its stern planes to move and the vehicle will increase the distance between the vehicle and the seabed. There is also a navigation system called the PHINS on the AUV that measures the pitch (whether the nose of the AUV is up or down), roll (whether the sub has tilted to port or starboard), and yaw (the heading of the AUV). Using the ADCP and the PHINS together, the AUV is able to follow a set of waypoints that plot a course across the seabed. Once the ADCP ‘locks on’ to the bottom it can pretty accurately tell the AUV in which direction it is going and how fast it is going, and hence where it is relative to the first point it made contact with the bottom.
In order to accurately track the canyon walls, the AUV needs to know the distance between itself and the vertical wall it is following, and needs to be able to adjust its heading by changing its rudder to avoid getting too close to the walls. James Perrett has written a piece of software that takes the multibeam data that the AUV is collecting, processes it with an algorithm that calculates the minimum horiztonal distance between the AUV and the canyon wall, and then converts this into a heading offset. Once this heading offset has been sent to the control centre of the AUV, the AUV will steer itself away from the canyon until it is at a safe distance. It will then carry on trying to follow the same track as before. In addition to the horizontal control algorithm, we have also had to ensure that we have safe ways of handling faults that the vehicle might have whilst canyon tracking. If the AUV’s rudder becomes stuck, or the multibeam system cuts out and fails to give us data to calculate the distance from the wall to name a few examples, the AUV will recognise that there is a problem, drop a large weight and head for the surface. The AUV can then be recovered and the fault fixed, before we have the added problem of it colliding with the canyon wall.

Tilting the RX head introduced some very interesting mechanical design challenges for me to solve. If the vehicle is too heavy, then it will sink when placed into the water and will be unable to surface; this is called the ballasting of the AUV. In order for the AUV to float level in the water, the weight has to be distributed evenly in pitch and roll, otherwise the AUV could end up pointing tail upwards, and be rolled over to starboard, and wouldn’t fly level; this is called the trim of the vehicle. Tilting the RX head could have had a large effect on the ballasting and the trim of the vehicle, as the RX head is very large and very heavy, unless the original positioning of the RX head was very carefully chosen to minimise adverse effects. More floatation had to be added to the vehicle to ensure that it wouldn’t sink, and it had to be added in the correct place to ensure correct trim. The mounting of the head had to be completely reversible, as the multibeam would be used in both its downwards and tilted configuration on the Codemap cruise. This meant that certain features of the design had to be thought about very carefully. The RX head is mounted underneath the vehicle, and is set into the centre section. It is mounted on a welded Aluminium wedge which is set at 20˚, with the transducer head pointing to Starboard, (See picture).

In the initial stages of the cruise Autosub6000 was being used to collect multibeam maps of the canyon with the RX head in its downwards configuration. We hope to improve the detail of these maps by doing passes over the same area with the RX head in the tilted position. At this current time, we are in the process of completing one of our first ever missions using this vehicle set up and the horizontal collision algorithm. The results will be posted in due course! 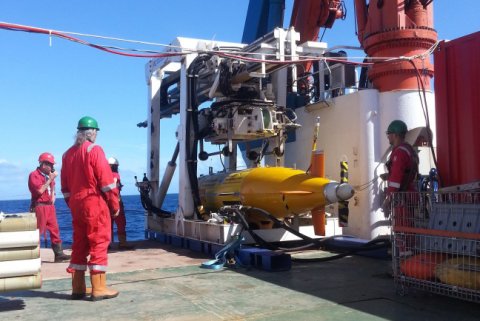 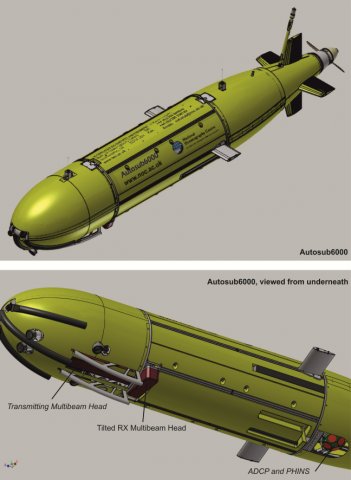