Cores and coffee: life on a research cruise

Before leaving Edinburgh, I was gently warned by several colleagues that life on a research cruise would be very different from my normal 9-5 job with the British Geological Survey (BGS). Having spent two weeks on board the RRS James Cook, I can now confirm that this is indeed the case! The following is a brief summary of life on a research cruise for a first timer, and some of the lessons I have learned to-date:
4am… I can safely say that I have never consistently started work at 4am before in my life. That is one of the changes that really hit home very quickly when starting my first cruise!  This is a 24 hour research vessel and I work the 4 am to 4 pm shift. For the first few days I wandered around the science lab, like some form of zombie geologist with glazed-over eyes, unsure of where I was. Fortunately, a kind co-researcher took pity and introduced me to the good, strong coffee… the kind of brew that puts hairs on chests. Lesson No.1; a good mug of coffee is worth its weight in gold when on a research cruise!

Lesson No.2; meal times. I am a self-confessed foodie under normal circumstances but this has now increased to unhealthy levels of food fixation since boarding the RSS James Cook. As shifts are fairly long (12 hrs), meal times provide a time to relax a bit and chat with members of the other shift with whom you would usually have little contact other than at shift changeover times. An added bonus is that the food on board is delicious… “Steak Sunday” is a firm favourite with the crew and something I would be keen to continue with when I return home!

However, as you can imagine there is a slight drawback to having large portions of really tasty grub available to you three meals a day, but thankfully there is a small gym on the ship to help combat these unwanted side effects! Which brings me to lesson No. 3 I have learned so far… exercising on a rolling ship is easier said than done! Running on the treadmill can only be compared to running for a bus after an evening at the local pub; concentrating hard on putting one foot in front of the other without falling over! And hitting a punch bag that appears to have taken on a life of its own, swaying from side to side as the ship rolls, is a new experience and adds another dimension to working out!
Finally, I have learned the importance of having an upbeat, fun team around you. Sitting gazing at a computer monitor at 4am, clutching your rocket-fuel coffee and missing some of your home comforts, it’s easy to feel a little down but the team (mainly consisting of NOC staff and various university researchers) here has a very positive atmosphere around it which enables us to undertake some really exciting science whilst also having some fun at the same time! 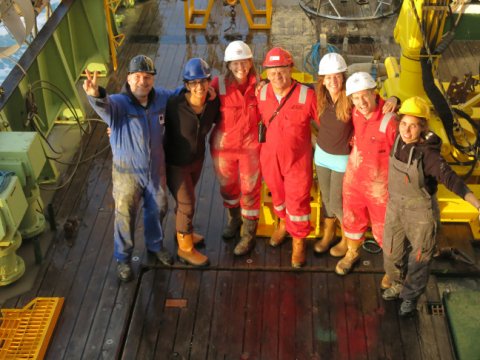 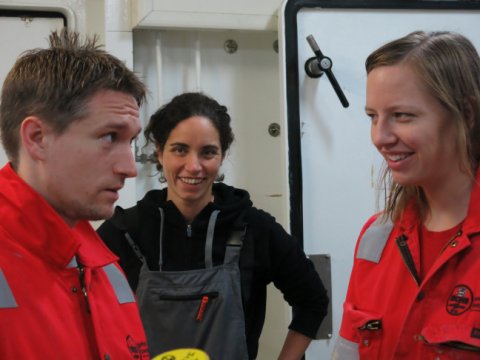 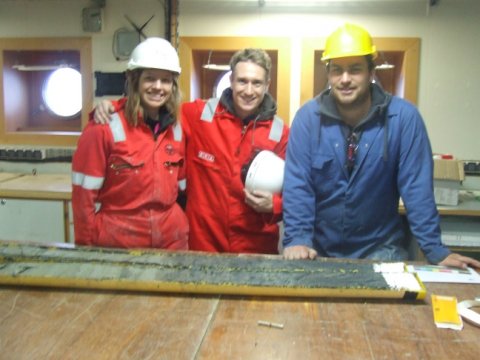