This blog post was written by Inge van den Beld, a PhD student at Ifremer

Last Friday night (4 Aug), ROV Isis was sent to the seabed one more time to take images of the seafloor of Whittard Canyon. The steep topography seen on the multibeam bathymetry maps, and video footage taken at nearby locations, suggested we would again encounter deep-sea corals during this dive. Deep-sea or cold-water corals are different from tropical corals as they live much deeper (below 200 metres water depth), can cope with colder temperatures (usually between 2-10°C) and do not need sunlight for their energy, because they lack symbiotic algae.

Earlier on the cruise, we investigated a wall on the opposite flank of this branch of the canyon using Isis. This wall was dominated by large colonies of colonial stony corals (mainly Lophelia), together with Ascesta bivalves, some gorgonian (seawhip or fan) species and a brown sponge. Therefore a similar community was expected on the (near-) vertical feature investigated on Friday night. However, although we saw many corals, the species assemblage was not really what we expected.

Large colonies of gorgonians, seen on the other flank, were dominating this flank of the canyon, while colonies of stony corals (perhaps not even the same species) were less abundant and smaller in size. The brown sponge was replaced by a white, cup-like sponge, and the Ascesta bivalves disappeared (except for one small patch). At the base of the vertical feature, large colonies of another stony coral, Enallopsammia sp., were encountered, and at the top, we saw large stylasterid hydrocorals.

The observed differences in community between flanks of the same canyon branch may be a result of the steep canyon walls being oriented at different angles to the current (which brings food and (coral) larvae), and possibly also due to differences in substrate. Initial analysis of Isis video suggest the rock type on this latest dive was igneous or metamorphic in origin, and very different to the sedimentary rock seen in the previous dive on the opposite side of the canyon.

During my PhD, I am studying the distribution of cold-water coral habitats and their faunal composition within the submarine canyons of the French part of the Bay of Biscay, including all canyons south of Whittard Canyon until Capbreton. During this JC125 cruise, we have seen many habitats formed by cold-water corals, ranging from gardens of gorgonians, fields of seapens comprising different species, and reefs formed by the colonial stony corals Lophelia pertusa and Madrepora oculata. Whittard Canyon is therefore very rich in terms of species, whether they are habitat-forming or not.

This is the first time that I have ‘visited’ Whittard Canyon, even though it is only a few nautical miles away from the northern part of ‘my’ study area. It is nice to see that the habitats I encountered in the French canyons are both similar and different from those in Whittard Canyon. Stony coral reefs on non-vertical terrain, some of the seapen aggregations, and a vertical wall dominated by Solenosmilia are habitats that are similar. However, some habitats in Whittard Canyon were new for me, for example the above described gorgonian and sponge community. On the other hand, fields of Funiculina seapens is an example of a habitat seen in French canyons but not in Whittard Canyon during this cruise. Some of the fish species swimming around in Whittard Canyon were also not known to me or only on paper, for example a fish probably belonging to the Halosauridae family.

Differences in benthic communities and dominant species between canyons may be caused by e.g. food supply, current directions, (investigated) depth range and/or substrate type. However, we haven’t investigated each centimetre of the 100 or more canyons that are present in the Bay of Biscay. So there is much more to explore and discover! 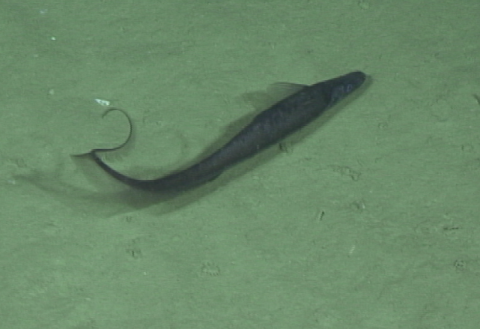